SKYVVA Integration Suite enables the integration between Salesforce and SAP-Backend over SAP-PO with less effort and without programming neither in SAP nor in Salesforce. It bases on the generation and customized approach to reduce effort and to accelerate the development of interfaces between those systems.
In order to be able to provide such a toolset and framework some component (green) has been developed by SKYVVA and has to be deployed on Salesforce and SAP-PO of the customer. On the SAP-Backend e.g. SAP ECC 6.0 there is no software installation needed. 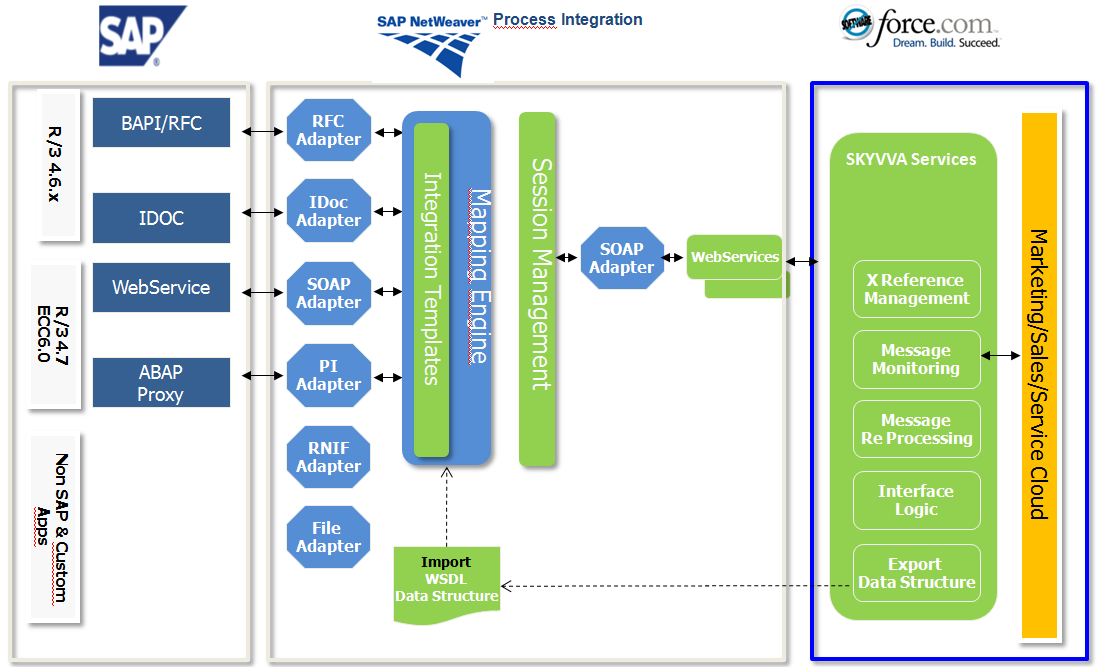 Creating an inbound interface is only possible when the Skyvva solution framework is set up correctly. When talking about the direction we have to clearly define the perspective from which platform we are looking for. Since we are coupling two platforms Salesforce and SAP together we have to clearly define from which view we are referencing when talking about direction outbound or inbound.

In this example, I have created the interface under “Skyvva_SAP_Salesforce” integration

Similarly, create the Outbound scenario for Query response as “QueryAccount_Response” as shown below

This field contains the SOQL statement for an interface. We have to specify the operation type
“query”. Another operation is not supported to query.

The section “Query” is needed to select data for the inbound interface. Here is the place where you
specify your SOQL-Select Statement. You also can do a joint to get data from another object. The syntax
is based on the SOQL-Syntax. Refer to the online help of Salesforce to read about the syntax of the SOQL-
Language.

If you specify the query parameter it should be done in this Syntax{!field_name} e.g.(!SAP_Division__c)

You can join the parameter by entering the Boolean operation AND or OR. You can also join different
table.

Here we are specifying the direction of the interface e.g. Inbound or Outbound. Since we have created an inbound interface. So, We have to specify the value as “InBound”.

Here we have to specify the processing mode as Synchronous.

Now download the WSDL for both inbound and outbound response interface as shown below.

First, we have to create a namespace in ESR like “urn:skyvva: Querysalesforce“.

Now create an external definition for Query Account request under the namespace like below. Here the WSDL is for Account. So, we can give the name as ED_SF_SearchQuery_Request. 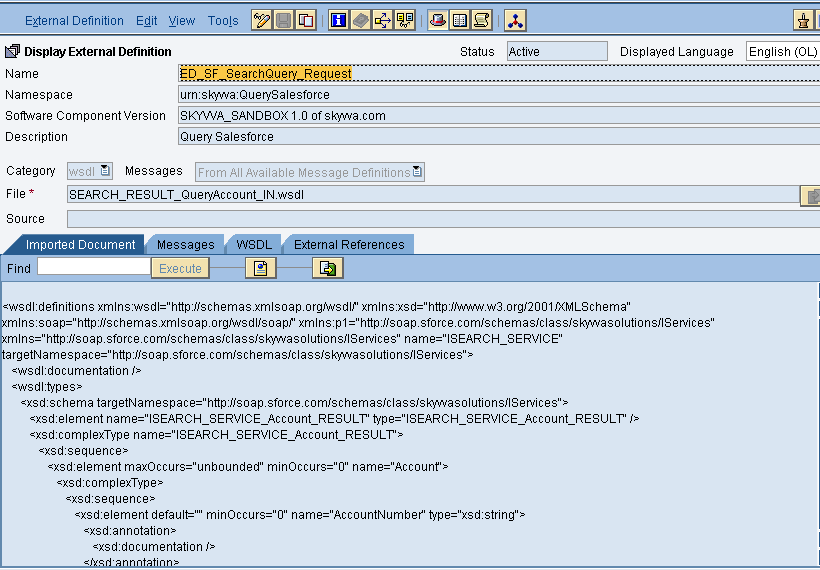 Now create an external definition for Query Account response under the namespace like below. Here the WSDL is for Account. So, we can give the name as ED_SF_SearchQuery_Response. 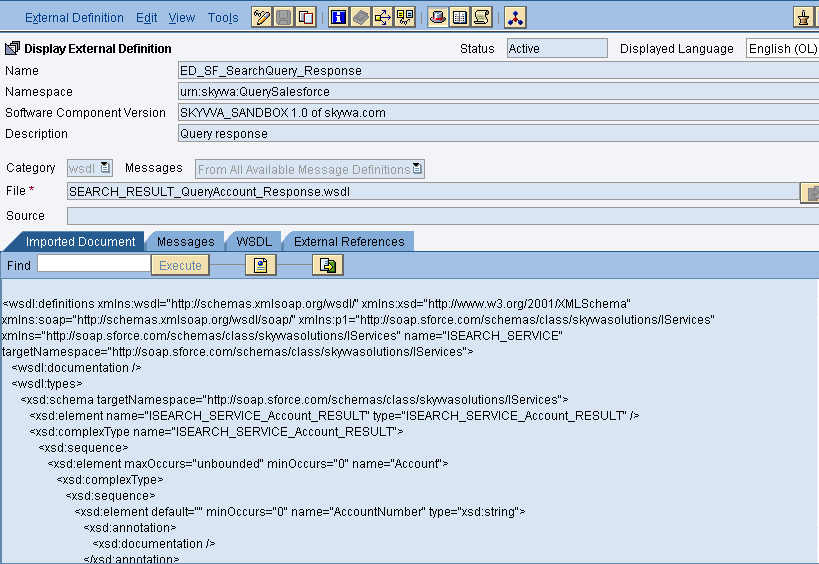 Since in this example, we are sending data from SOAPUI to Salesforce. So, we need to create data types for request and response as shown below. 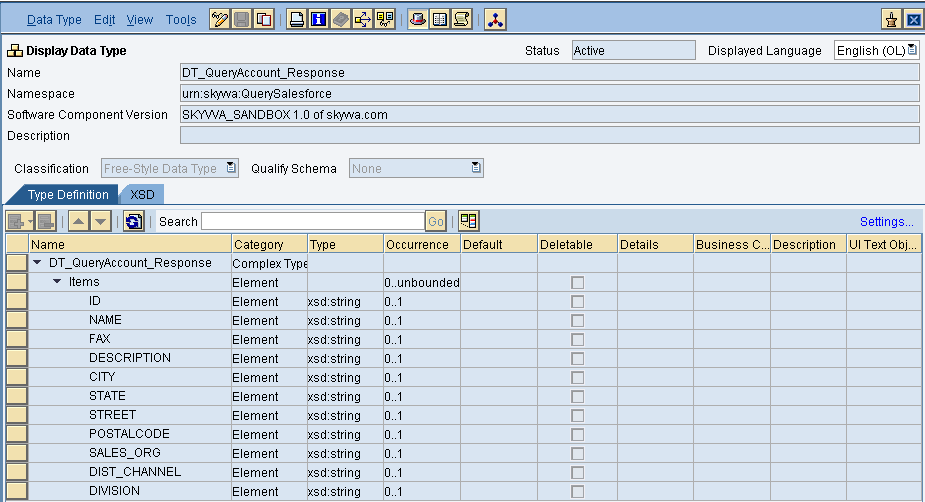 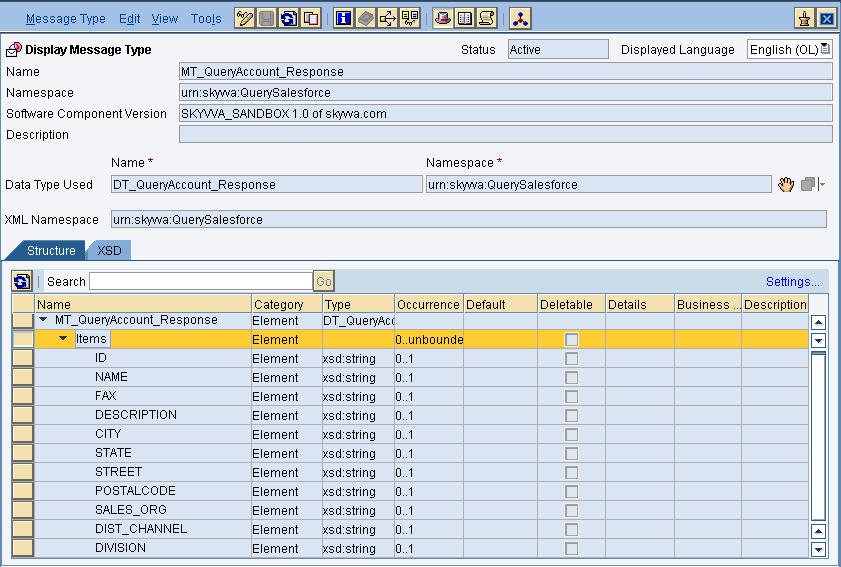 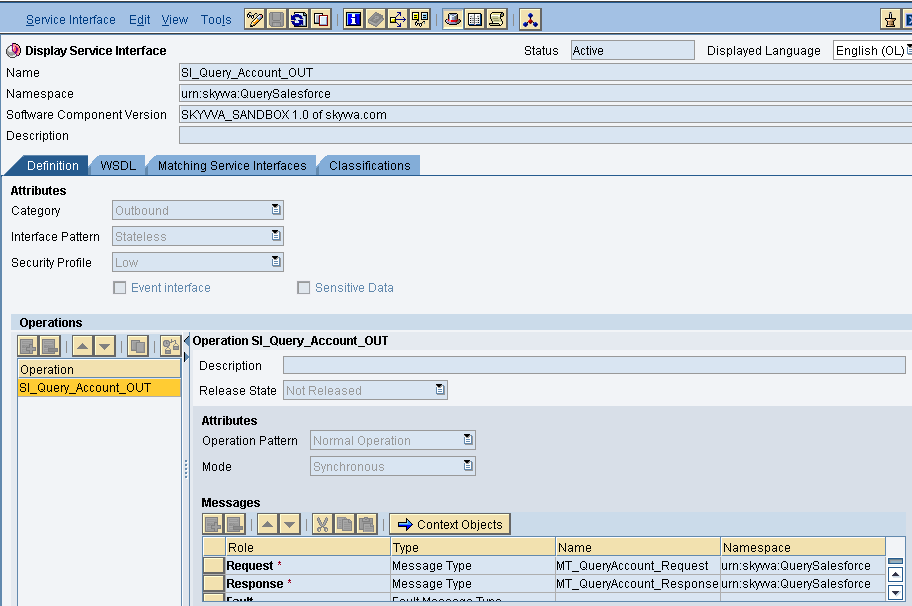 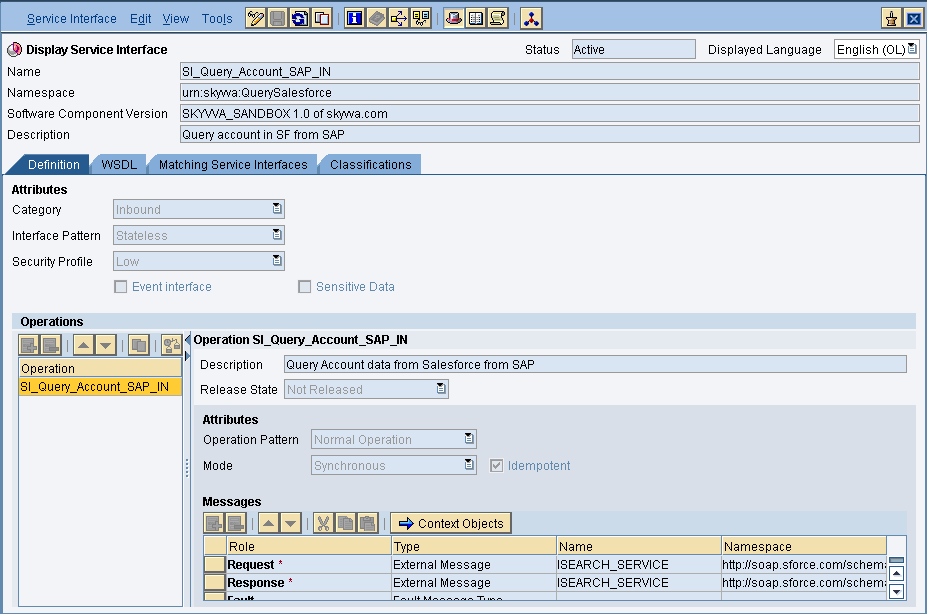 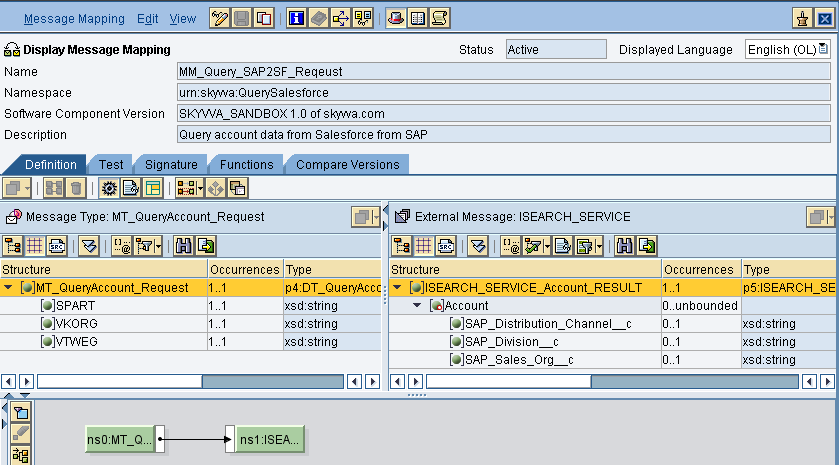 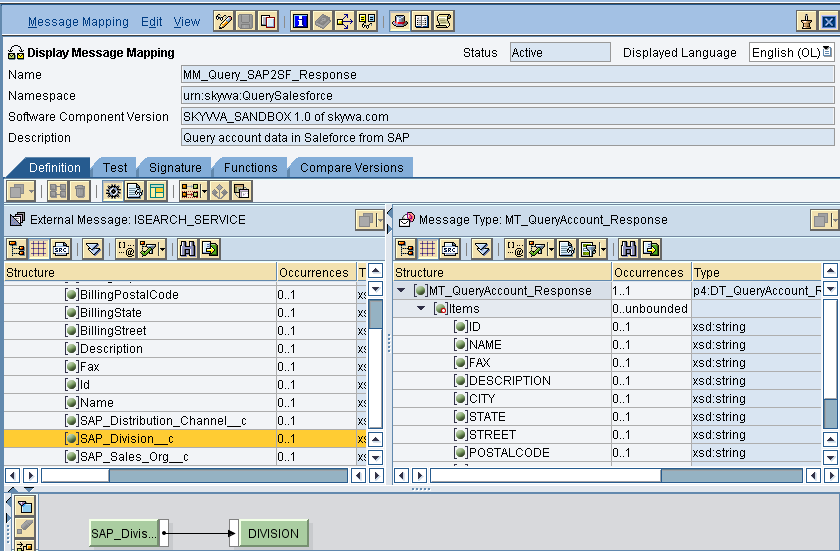 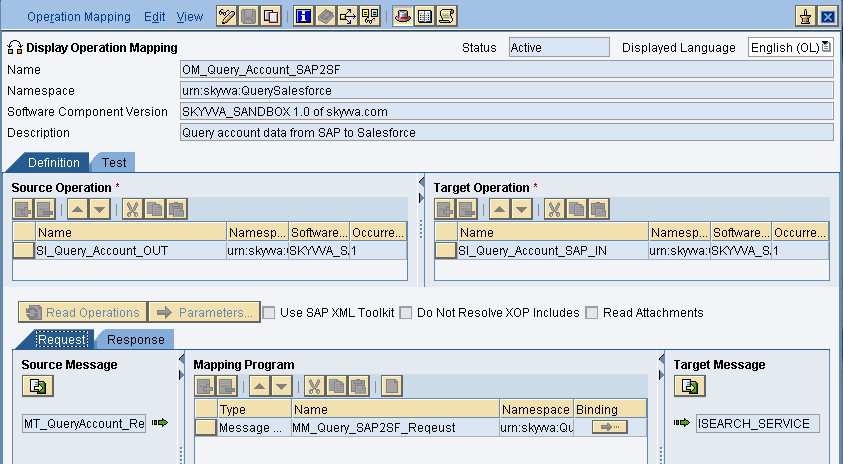 In Response-Mapping, a java mapping is needed to convert the Skyvva message format into a business structure. The java mapping will be provided from Skyvva and you just have to use it. 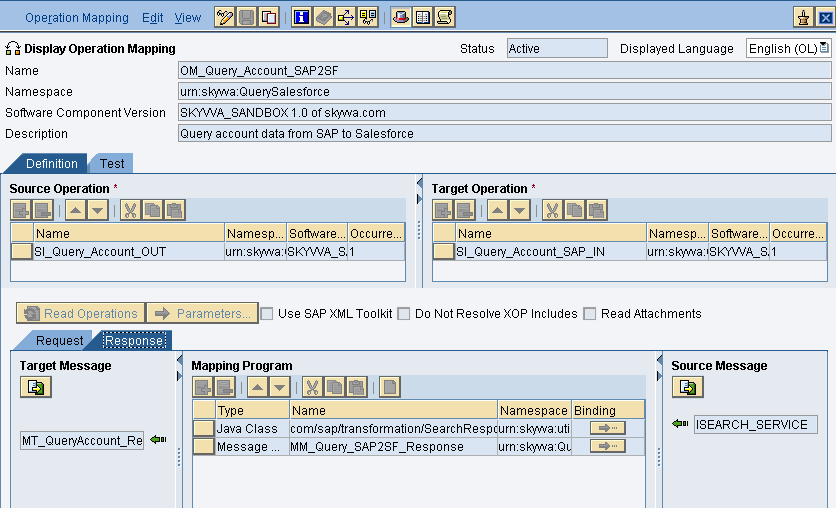 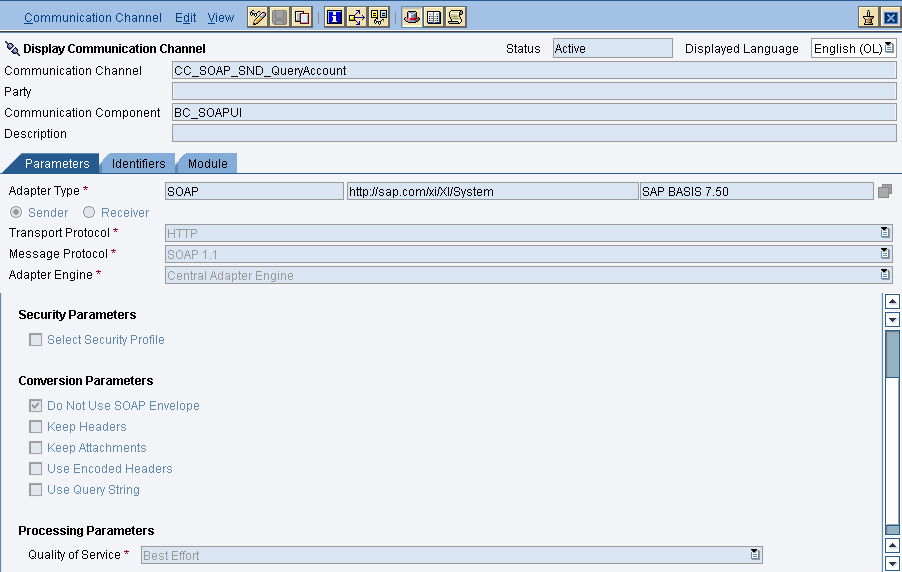 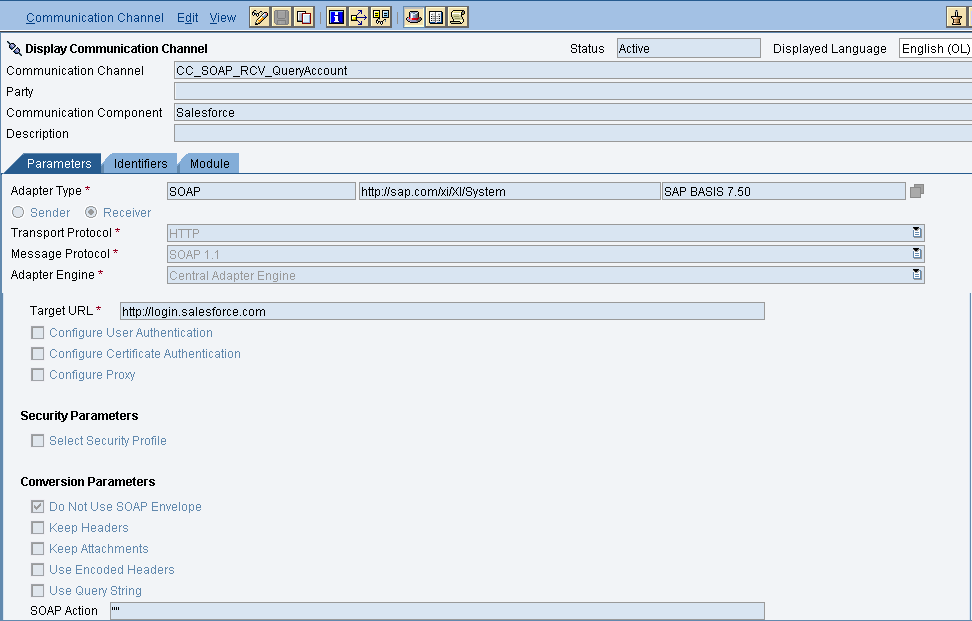 Below are the settings for Tab “Module”. Here, the SKYVVA module containing the logic for session handling and transformation logic must be specified. This is using the module version 3 Starting from version 2.27 Skyvva provides a single module, “Salesforce/GetSessionID_V3”, to be used with SOAP receiver channels. Module parameters are outlined below 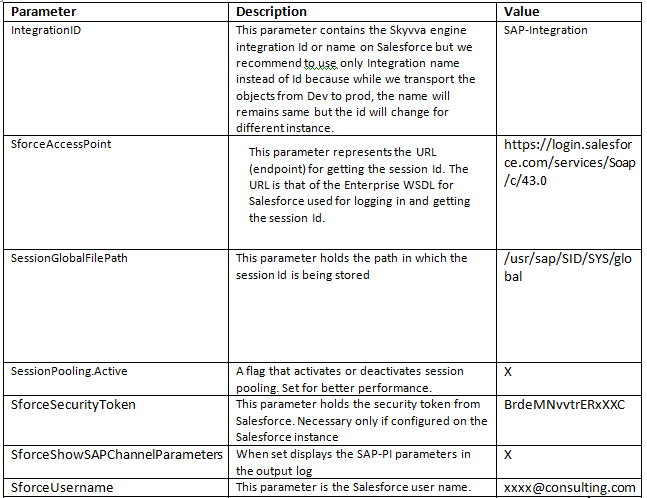 For the new Module we no need to use the Java mapping in response mapping to convert the JSON response into XML.

We can directly include the parameter in the module to convert the JSON Response. Here are the channel configurations for new module.

We need 3 modules in the soap receiver channel e.g.

1. SFDC_Query_REQUEST -> prepare the execution of the REST and BULK query and pass the message payload to the 3. module
2. XISOAPAdapterBean -> calling our new soap API ‘RouteRequest’ to just pass back the request from the 1. module
3. SFDC_Query_RESULT -> here we only fetching the result which has been executed The different way to put the SELECT statement

Here we are able to build the select statement dynamically by the pi mapping. Thus we need a field in the request payload which for example is called ‘SKYVVA__SOQL_SELECT’ and where we can build the SELECT-statement by using concat formula in the mapping. In this case, you are taking the value from this field and it will dominate the SELECT-statement on the module parameter.
In the request WSDL we need to add SKYVVA system field e.g. ‘SKYVVA__SOQL_SELECT’ and build dynamically the SELECT in the mapping.
We have at 3 different places to put the SELECT statement e.g.:

Here is the SQL Statement used in Module Parameters. 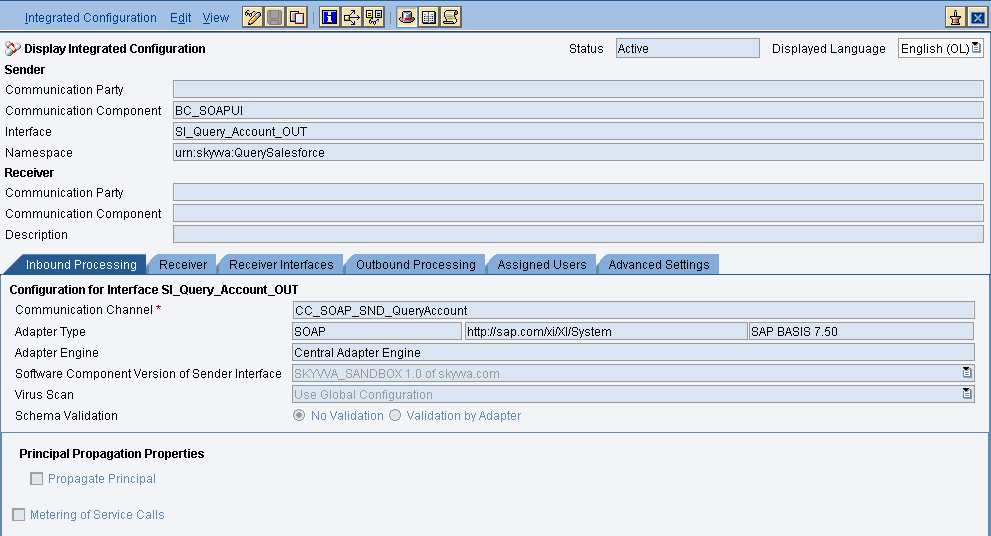 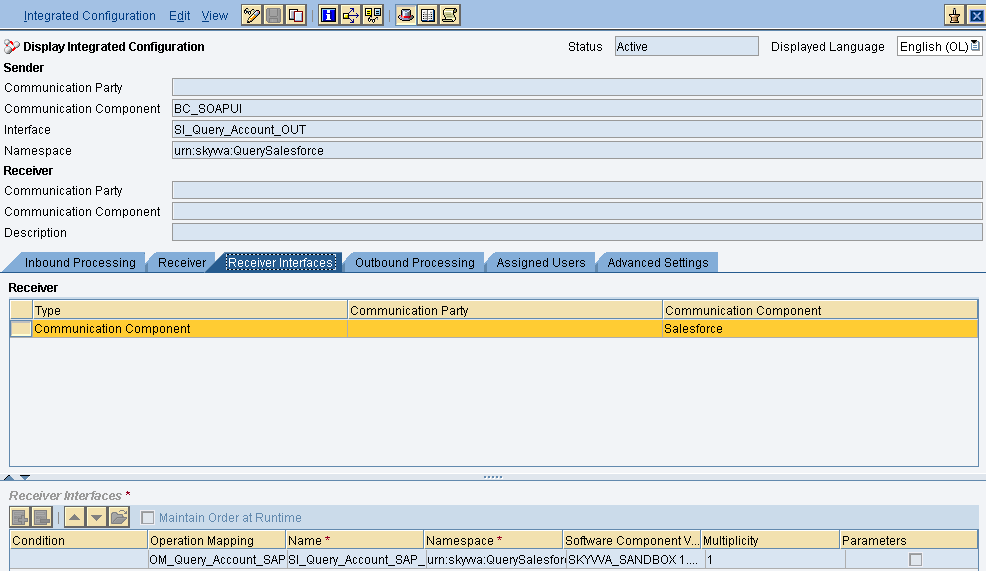 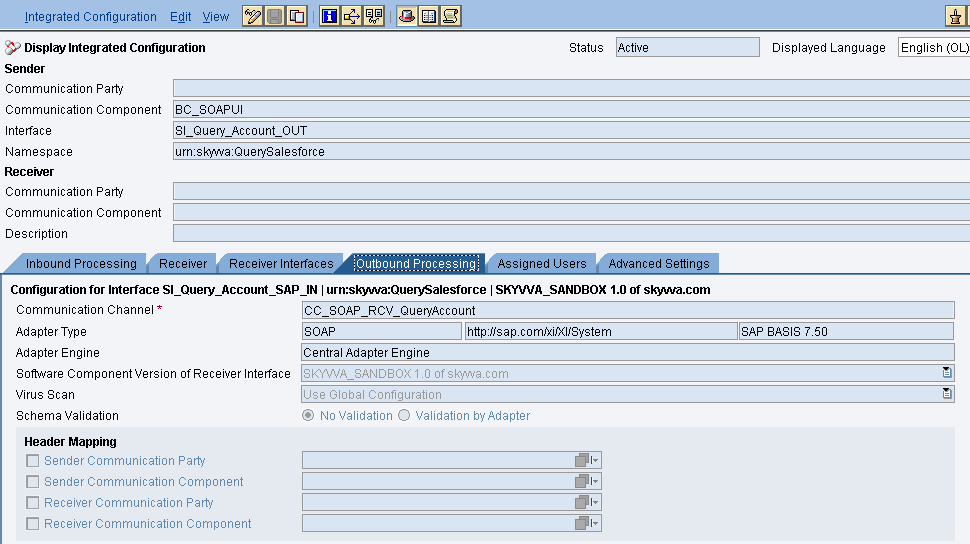 I am sending the data from SOAPUI. We are getting the JSON Response from Salesforce. Here we can test the interface directly using the SKYVVA SOAP API. The result will be in JSON format. 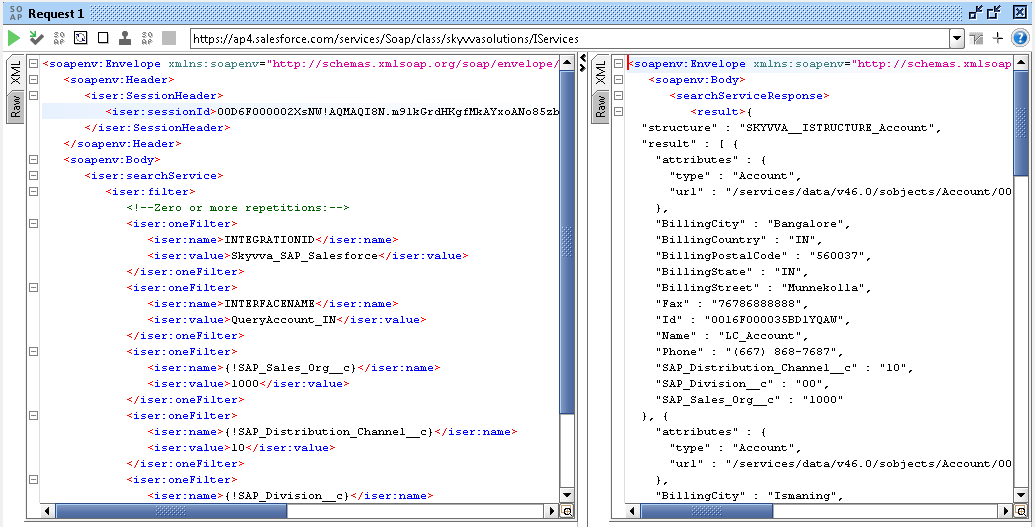